In Georgia, in the tiny Didube bus station, characters flow into Niko’s veterinarian pharmacy. They are not really customers, some of them come in by mistake. The faded poster, with its cows that have turned blue over time, is the only trace of an activity connected to animals. The store, its counter overflowing with packaging and other useless things, could have been filmed in another era. But time stands still here, and it really is the Georgia of today that we find in this snapshot of the nonetheless incessant activity at the station. Nodar’s refrain, accompanied by his guitar, paces and pushes the film forward, in fits and start, according to the arrivals and departures of the buses headed for other destinations that are perhaps more rooted in the modern word. The passers-by, also a little lost themselves, in this place that is merely a transit point, circulate between the buses and the market stalls, as if uncertain about the future the country has in store for them. The Didube terminal will only be a stop before going elsewhere. 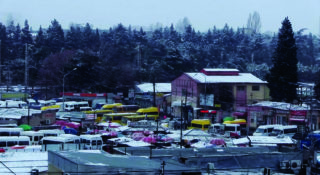 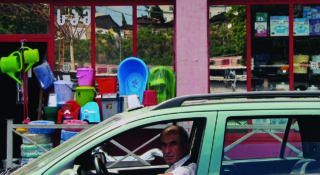