Boureima, from Niger, met Lo Thivolle at university in Toulouse. Later, they met up again, on the bench of a public square, where the former rules as “King of the foreigners, those who live on the streets like we live in a house” in front of the camera of the latter, who writes his film Dark on Dark, walking, in the “flow of days.” Over their discussions, Lo Thivolle learns that Boureima’s father was the king of a village, the principal hero of Les Temps du pouvoir, an ethnographic documentary film by Eliane de Latour (Little Go Girls, VdR 2016), that they watch and comment on together, as if it were written that film should be the common ground of “their reunion.” Thus, is sketched out a gesture of sharing, a film conceived like a rite of passage towards a mutual recognition that builds itself shot by shot. And what is striking in this “night illuminating the night” is the peaceful fall of a character who goes to the end of their solitude and finds, in their deprivation, a lost power: the only one we can claim, moreover, that of being ourselves. 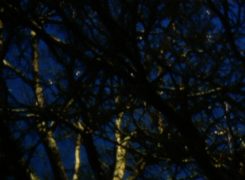 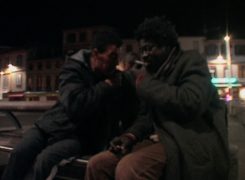