Flanked by her phlegmatic sidekick, Dariko is the only outside broadcast journalist at a local Georgian television channel. With derisory resources, she races from one report to another to give an honest, if not objective, image of the current events that shape her environment: from the capture of a “giant” owl to the obituaries – where we thus learn that the bearer of the Soviet flag fluttering over the Berlin Reichstag in 1945 has just been buried — passing via the elections. Noticed with Bakhmaro (2011, screened as part of the Focus Georgia, VdR 2015), Salomé Jashi provides, with humour, distance and a consummate sense of framing, a pseudo-ethnographical portrait of a community that, due to modernity and technological miniaturisation, has never ceased to gather material about itself. The multiplication of camera angles (journalist, filmmaker, amateur filmmakers) in The Dazzling Light of Sunset induces a relative competition between images and their distinct depth of focus. She turns the micro-events that punctuate this tragi-comedy with absurd overtones into revealing examples of a country whose transition still looks chaotic.
Emmanuel Chicon 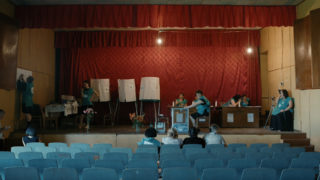 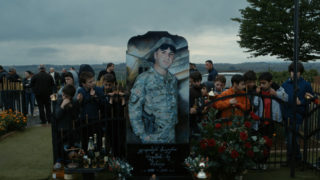