At its creation at the beginning of the 20th century, the role of the IBIS mari- time school was to take in orphans who had lost their fathers at sea, offering them a home and nautical training. Today, it’s a boarding school home to around a hundred boys aged 6 to 16, who learn the very modern realities of the fisherman’s trade.
In A Sea Change, although the sea seems to have been “mastered” and plundered with everything that technology has to offer, the life of these boys is told to us with old-fashioned charm. Their games with torches in the dark- ness of silent dormitories, the aquatic choreographies suddenly appearing at sea and the starched costumes of the young sea cadets send us back to other times with nostalgia. At times, the film itself, behind its very contemporary appearances of images of the sea filled with formal findings, plays with the traditional and now dated aspects of the documentary form. Immersed in the day-to-day life of the children, whose future is traced out on digital nautical charts and tracked via sonar, we thus revive the imagination this troubling enormity holds beneath its waves. 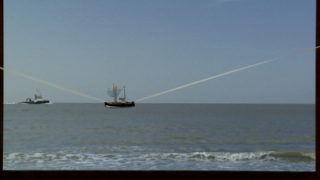 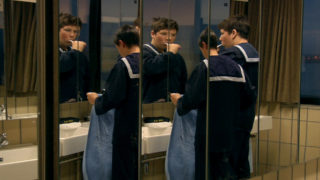