During the Swedish-Lithuanian war 300 years ago, the bell of the Plateliai church was apparently dismantled and then left to sink at the centre of the eponymous lake. In 2006, Audrius Stonys followed a scientific diving expedition organised for the purpose of finding the disappeared bell and thus confirming what seems like a popular legend. Like in Countdown, the filmmaker widens his consideration of collective memory and the bringing into crisis of belief, with its aspects reminiscent of a “Hunting of the Snark”. The film intertwines several levels of story: those of the region’s inhabitants, of all generations, interviewed in the present day, those of the silent black-and-white archives, shot, in particular, during the Soviet era, and those of the dives filmed in an increasingly abstract manner. For, behind the investigation, the underlying motif of The Bell appears during the final minutes of the film, which fuse, in the same colour, the underwater images with those of a forgotten carnival: legend or reality, it doesn’t matter, this sunken bell is only the sign, the distant echo of a lost world.
Emmanuel Chicon 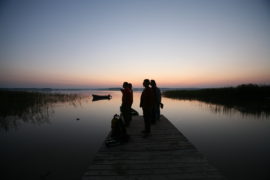