In an isolated village in the Lithuanian countryside, an old woman faces the camera and recites a poem. Later, she will scale a vertiginous ladder up to the roof of a church, like this man who is slowly climbing up a factory chimney. The starting point of Audrius Stonys’ second short film is again a series of questions that he summarises as follows: “What is the world like when you look at it from the roof of a church? What holds these men, suspended between heaven and earth?” And as is often the case with Stonys, there are no definitive answers: film is only a perceptive instrument, a modest tool to attempt to contemplate reality from another point of view. The camera movements seem as light as the snowflakes that cover the landscape and amuse the carefree children. By freeing ourselves from the laws of gravity, we have the divine power to contemplate the cosmos, as small as it is, from a vertical axis. Tarkovsky — a seminal filmmaker admired by Stonys — is not far away, and each shot in Antigravitation contains the potential for a fall.
Emmanuel Chicon 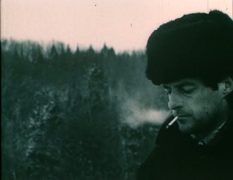 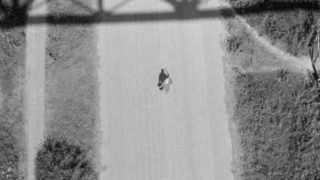 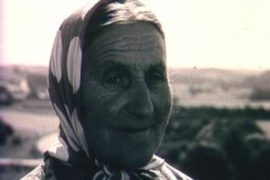