The first row of the Stonys pantheon features timeless characters. This one could almost be the exception, having lived out a kind of saga. Because Ramin Lomsadje is a former Greco-Roman wrestling champion, famous all over the Soviet Union: under his pseudonym, Fantomas, he became a living legend by winning seven matches in only 55 seconds thanks to his three-strike technique, a carefully guarded secret until today. Still going strong despite his 75 years, he lives alone, under the gaze of a puny kitten, amidst his mementos, sometimes mentally reviewing the film of his glorious past. The camera follows him in his daily activities, sometimes during his “teaching” of young wrestlers who represent “the future” of a sport in decline. Above all, Stonys accompanies his hero on a long trip through Georgia, where he visits his mother’s grave. And little by little, the film reveals another fissure, that of a man who is still waiting for the love of his life... From an epic tale, Ramin drifts slowly towards a ‘chanson de geste’ tinged with melancholy.
Emmanuel Chicon 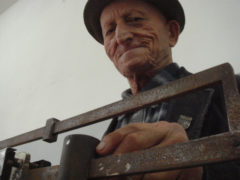 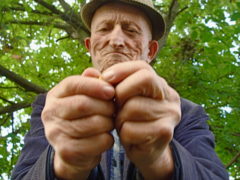