In 1970, Léopold Senghor – President of Independent Senegal – wants to create a “Senegalese” architecture... and commissions two Frenchmen to build CICES, a modernist masterpiece in which the Dakar International Fair is held every year. In static shots, Laurence Bonvin captures the spirit of place and its modern usages, which interact with the ghosts of a glorious past.

At the International Foreign Trade Centre (CICES), the exhibitors are finishing off their stands, slogans and advertising posters to lure punters at the rather sparse annual Dakar International Trade Fair. Laurence Bonvin uses the pretext of this trade event to film an iconic site, which owes its existence to the desire of Léopold Sedar Senghor, the former President of independent Senegal, to create a distinct national architecture. And yet, in the 1970s, it was two Frenchmen that he commissioned to design these modernist buildings based on repetitions and variations on the triangular shape. In the first part of the Ghost Fair Trade, co-directed with the artist Cheikh Ndiaye, static shots capture this masterpiece of graphic purity from every angle. Formal rigour then morphs into a more historical (via photographic archives and voice-over) and above all, fantastic treatment of the CICES. By filming beyond what is immediately visible, the Swiss filmmaker thus conjures up the spirits of the place, facetious guardians of an architectural complex still haunted by a pan-African dream of prosperity. 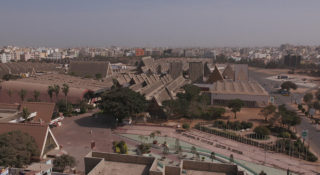 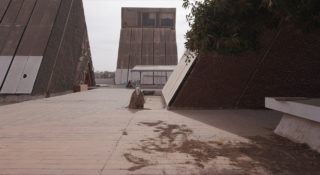 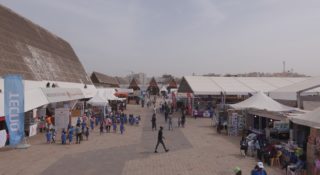 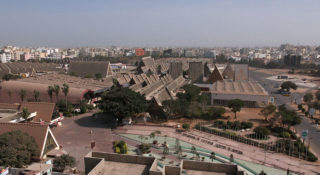