The most closed-off country in the world, North Korea, is a country whose leaders would like us to believe is perfect. “The best country in the world” says Zin-Mi, the little girl through whose eyes we discover it. Zin-mi is preparing to join the Children’s Union, the first stage in the system created by Kim Il-sung. She will soon thus be part of this ideal society.
The Russian director, Vitaly Mansky, was able to film her and her parents over an entire year, with the consent of and under the surveillance of the government. The film, which seems to be a clever replica of pure propaganda, with this charming little girl meandering around in a perfectly framed painting of ideal communism in sparkling colours, suddenly changes dramatically. The varnish cracks and reveals the orchestrated staging. The filming locations, just like the characters and the situations filmed, were designated by the team assigned by the authorities, and simply by showing this frame and the instructions received, Mansky allows us to see the reality of this gigantic manipulation through an interstice left open. The other side of the décor is revealed. 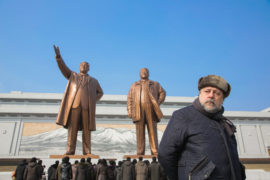 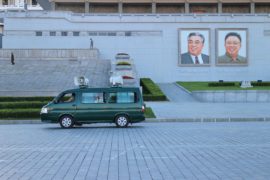