Afghanistan is a country at the centre of a tragic contradiction. It is magnificent in its nature as well as tormented by its people’s pain. Even the legends talk of an earthly paradise that turns into hell. War is its crucial point. For centuries, the Afghans have had to deal not only with powerful enemies coming from the exterior, but also with their internecine strife. The subject of Land of the Enlightened is not therefore a new one: a gang of Afghan kids indulges in smug- gling and banditry in the high mountains of Pamir while, in an outpost positioned on the summit of a mountain, American soldiers await the end of their mission. But what comes as a real surprise is the form of the story, which unfolds through dazzling shots, following the rhythm of a captivating action film in the form of a superb rhetoric of image. Its characters live in the plasticity of their figures. Their gestures and words are intertwined. The landscape, majestic and immobile, watches as life cruelly runs its course. 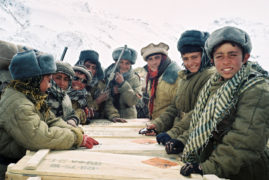