Images (snow-covered roads, empty corridors, objects, TV programmes, inte- riors of houses or hotel rooms, etc.) are shown on a screen split into four, while a voice-over fills these spaces with fantasies, with a mix of encyclopaedic culture and visionary intelligence, made of anecdotes, lucid reflections, paranoid obsessions, urban legends, memories of films... Suddenly, the man appears, in medium shot, baseball cap and fake glasses hiding his eyes. He lives in the street, he lives on charity, and he is afraid of the future. He talks about nature and technology, about Star Trek, the Bible, extraterrestrials, artificial intelligence, humanity controlled by higher powers. Although his discourse follows the logic of conspiracy theories, the truth of his solitude emerges in a fragment: “All you need in life is a roof, clothes, three meals a day... and love.” Here, Gagnon draws the portrait of “a pure spirit, [...] freed from the force of terrestrial gravity and the constraints of time [...].” (DG). 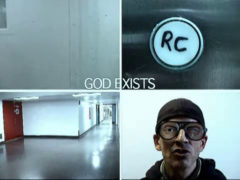 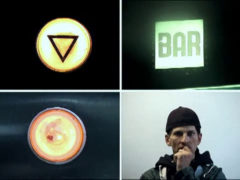