“We use the strength of resilience pro- voked by six emotional states: bore- dom, sadness, solitude, anger, disgust and indifference.” The manifesto of the At-Work collective appears onscreen, proclaiming artistic and intellec- tual guerrilla tactics with Situationist aspects: “Work is considered as an experimental field in which conflictual relationships between private utopias, collective necessities and economic realities are at play.” The images show school kid farces, often funny, in which men and women enjoy themselves in their workspaces, by misdirecting means of production in order to create fun situations. Anecdotes are also told, like that of a transporter of works of art for a museum, who exhibited famous paintings at the side of the motorway or in the toilets of a service station, in order to take photos of them... Divided into chapters by the appearance of slo- gans inciting action, Data is a pivotal film within Gagnon’s work: the insurrec- tionary thinking that haunts him sum- marises his artistic approach and his personal belief. 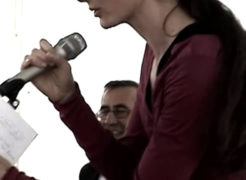 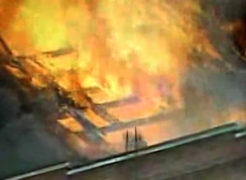