The filmmaker’s daughter looks at herself on a computer screen, using it like a mirror. She is surprised to see the colour of her lips…A searing indication of the future generation’s relationship with image, fascinated by selfies, the globalised affirmation of its own presence in the world. An intimate short film that summarises the filmmaker’s poetics and cinematic system.
Luciano Barisone 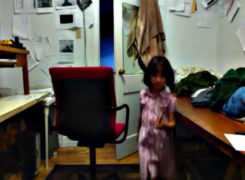