Sofia, Hedvig and Maja have grown up with bereavement; they were only eight, ten and sixteen years old when their mother took her own life. In this sensitive and graceful film whose images unfold over ten years, Jenifer Malmqvist carefully accompanies the girls, putting their loss into words, and capturing joy, sadness, and the passing of time.

Sofia, Hedvig and Maja have grown up with bereavement, forever affected by their mother's suicide at an early age. It is a shared wound but one experienced differently by the three girls – aged eight, ten and sixteen years old when it happened –, which Daughters shows with sincere concern. The director Jenifer Malmqvist accompanied the three sisters, the first time for the two years that followed the event then ten years later, as a means of observing the evolutions and continuities of bereavement. The powerful idea, the film’s grace, lies in its refusal to construct a linear account. As the editing alternates the views of the characters between several stages of their youth, the speech spreads across different ages in the same scene. The film unreservedly espouses the form of a sensitive melodrama, and successfully seizes the contradictions of bereavement, accompanied by the permanence of sisterly joy. Daughters feels like cotton wool, damp yet velvety;  forlorn yet radiant. 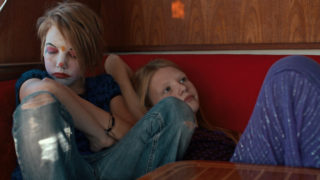