Intrepid French scientists Katia and Maurice Krafft loved each other as much as they loved volcanoes. Composed of spectacular images captured by the couple as they endeavour to comprehend the mystery of volcanoes and narrated by the American filmmaker and artist Miranda July, Fire of Love is an adventure film about time, the unknown, and the meaning of human existence.

Unmissable figures of French television until their deaths at the beginning of the 1990s, Katia and Maurice Krafft were intrepid scientists – he a geologist, she a chemist and physicist – with a passion for volcanoes. Founders of the Vulcain Volcanology Centre, they left behind an extraordinary iconographic collection, filled with hundreds of hours of spectacular images recorded by the couple in their endeavours to comprehend the mystery of volcanoes. From these sequences shot in 16mm, as well as photographs, illustrations, books and media appearances, Sara Dosa, who is an anthropologist, creates a collage, with a line of questioning that is ultimately related to that of a geologist: how does one fill in the gaps - where myths are so often born? Narrated in voice-over by the American filmmaker and artist Miranda July, Fire of Love is an epic adventure film about love, time, the unknown, and the very meaning of human existence, thus definitively confirming the camera’s faculty to move from instants in time to posterity.

Filmmakers or researchers from UNIL will take you on a walk through the streets of Nyon to delve into and deepen your appreciation of this film’s subject. Balade avec Anne-Sophie Bouvier, vulcanologue 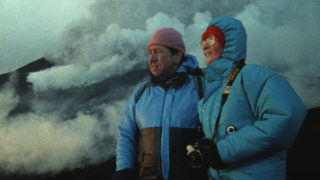 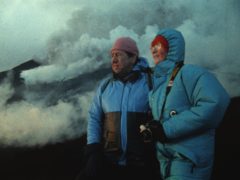