In comparing an old photograph of her great-grandmother, Genoveva, with her own photo and discussing it with her daughter—who has a strong resemblance to great-grandmother—the director questions the meanings of descent and identity. How do you define your origins? From this personal questioning on ancestors and more particularly on Genoveva—probably a Mapuche Indian—we focus on the situation of the indigenous Chilean communities and on the numerous injustices and discriminations endured and often forgotten by history. Just like this great-grandmother discovered on an image who has, in a certain manner, been erased from view and from memories. An omission that reflects the disappearance of a people’s identity in the social and historic context of a country. Paola Castillo’s personal quest thus opens onto a wider questioning, also seeking to more fairly examine the Mapuches—too often victims of unjustified discrimination that is exacerbated by the media. A crucial question to explore a complex national reality. 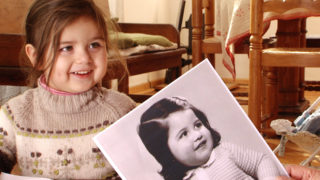