In El Paso, an American border city, a marginal community survives despite being abandoned by the political system. Taking up a position of empathy as close as possible to his characters, Carlos Alfonso Corral delivers a raw and powerful testimony and makes himself the spokesperson for these unearthly tramps.

Almost ten years ago, Carlos Alfonso Corral, a Mexican filmmaker and photographer, crossed the bridge that separates the cities of Ciudad Juarez and El Paso, to document the marginal communities living on the American side of the border. Left partially abandoned by the political system, these homeless people somehow survive, roaming the streets and the shelter. Whereas they are usually accustomed to staying in the shadows, the film offers them an unprecedented space for expression, made possible by the mutual trust that the director and this community were able to grant each other. Without miserabilism or voyeurism and avoiding none of the cruelty of their everyday lives, Carlos Alfonso Corral takes up a position of empathy as close as possible to the bodies of his protagonists. As for the homeless people, they open up completely to the camera, powerfully delivering a form of desperate frontal poetry, digging deep into their innermost hopes and anger. A kind of social film noir, Dirty Feathers releases a raw and powerful testimony and makes itself the temporary voice of these unearthly tramps. 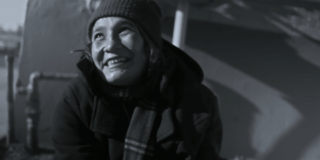 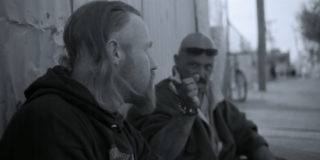