Trapped in Venice due to the lockdown, the director looks back at his connections with his deceased father and the city which has suddenly been emptied of its tourists. The hoarse voice of Andréa Segre, the striking images of a deserted Venice and a moving letter to his father form the central thread of this perfectly controlled, fascinating collage.

February 2020. Having gone to Venice, a city with which he maintains complex connections, the director ends up isolated because of the pandemic. In the manner of Albert Camus’ The Plague, he gives us a chronicle of life under lockdown for the Venetian residents through encounters and archive images bearing childhood memories. Molecules moves forward like a personal diary, by associations of ideas and images, constantly referring to the figure of a silent and now absent father, but also to the filmmaker’s own paternity. The hoarse voice of Andrea Segre, striking images of the silent city and a moving letter to his father form the central thread of this perfectly controlled, fascinating collage. This narrative logic bestows upon the film its captivating form, overflowing with a poetry that conveys all the emotion and dizziness felt during the lockdown period of spring 2020. An account of this intimate moment of reflection and uncertainty, emphasised by the strangeness of a deserted, melancholically beautiful, Venice. 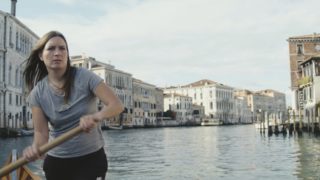