Since 2011, the International Christian Embassy, an evangelist organisation, has been sponsoring the organisation of a beauty contest in Haifa reserved for female survivors of the Holocaust living in a retirement home. Following the journey of Sophie Leibowitz, competing for the 2016 title, Eytan Ipeker questions how the memory of the Shoah is turned into a spectacle for political purposes.

Beauty contests, with their proven sexist aspect, can irritate. But that which has been taking place since 2012 in Haifa can arouse horror. Sponsored by the International Christian Embassy Jerusalem, a right-wing evangelist organisation, and a great supporter of the annexationist policy of the current leader of the Likud party, this competition aims to elect a “queen” chosen among women living in a retirement home that only accommodates survivors of the Holocaust. Sophie Leibowitz, octogenarian, entering the running for the 2016 edition, is participating with reticence (in memory of her sister) in what must really be called the manipulation of a traumatic past, and of which she gradually becomes aware. Eytan İpeker followed her from the rehearsals led by Heli Ben-David (ex-Miss Israel 1979) to the escorting of the participants, by limousine, to the ceremony itself. By using anti-dramatic choices of framing and editing, the filmmaker clinically observes the behind-the-scenes of a show that exploits the survivors of the Shoah in the service of ultranationalist ideology. 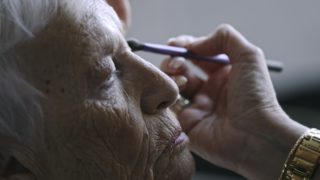 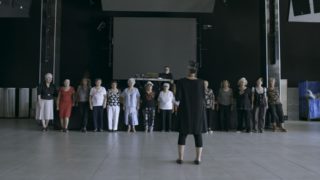