The metamorphosis of Zurich's old freight station, observed from the filmmaker’s window, becomes the medium for a personal reflection. This filmed diary unfolds during the construction of a prison and police centre, with the accounts of refugees waiting to be deported from Switzerland. The erasure of the past and its replacement by security apparatus are revealed.

A bumblebee among the cherry blossom. Fireworks. The jaws of a mechanical digger bites off a street light. Lovers kiss. A plane prepares to land… Whether very close, and captured on a telephoto lens, or so wide shot as to reveal the whole city, the point of view is always the same: the man behind the camera is constantly filming from the window of his studio that looks out over where Zurich’s old freight station once stood. He films night and day, rain or snow. He films the demolition of buildings that were once witnesses to history, when the old station is dismantled. Then he films the construction of a vast and inaccessible building that will soon house a prison and police centre. Sometimes in slow motion, sometimes sped up or in reverse, the 35mm images he records in different seasons expose the passage of time. They are accompanied by a voiceover that draws on personal accounts of refugees and prisoners awaiting deportation. They testify to a story being built on the fear of the other. Like the time capsule buried at the start of the project to the sounds of an alphorn, Nemesis keeps trace of what we would prefer to conceal. 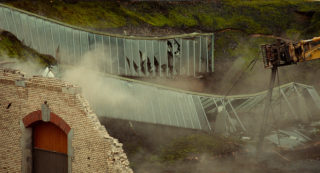 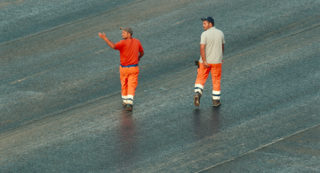