A crew of a trawler crosses the ocean with one aim in mind: to catch 2000 tons of tuna. Out in the deep waters for months, these men share extremely harsh living conditions. Between poetry and social criticism, Fish Eye invites us to reflect on the mechanisms of capitalism through industrial scale fishing.

The Parsian Shila is one the largest industrial trawlers crossing the ocean with one aim in mind: to catch 2,000 tons of tuna. On board, the crew led by Iranian managers, is mainly made up of young Africans. Despite the social differences, they are all prepared to live far from their families, for the time of this excursion. These men are forced to share everything; extremely harsh working conditions, the day to day of distance or equally difficulties and days of joy. Out in the deep waters, life unfolds frozen in time, atavistic, like an account watched through the wet eyes of a fish. With this ocean crossing, Amin Behroozzadeh invites us to plunge into the everyday life of large-scale fishing, which is presented in the film like a pitiless industrial work assembly line, but not exempt of poetry. Fish Eye creates a lyrical gaze between the sea and men, while offering us a committed consideration on the spiral of wild capitalism in the form of this contemporary leviathan, the Parsian Shila.
Elena López Riera 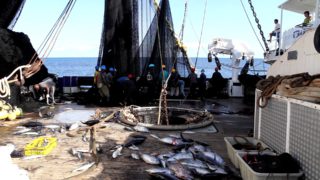 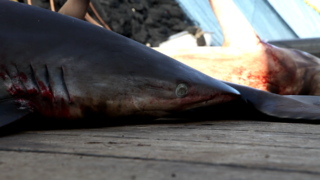