1940. On the border between Latvia and the USSR, a woman is killed in front of her house as she tried to protect her son from the liberating attack of the Soviets. Almost 80 years later, the archive photo bearing witness to this news item and representing a collateral victim of the European Union’s founding conflict forms the starting point for a journey undertaken by Davis Simanis. He navigates from one side to the other of this border, which today represents another separation, one that is geographical but also cultural: between Europe and Russia. Setting out to encounter people at the frontiers of these two worlds, he creates a space made of mental images and representations in which the collision of different visions appears. A surveillance post for migrants attempting to reach European territory, a religious procession against the glorification of war, or the filming of a thriller with Islamist terrorists in the Latvian countryside are among the scenes that highlight man’s proclivity for imagining lines that do not exist until they are made visible. 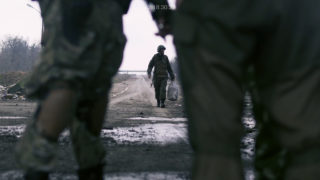 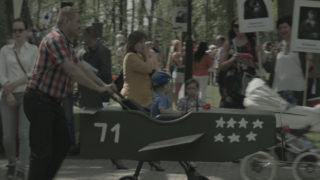