A man moves slowly about his rundown house. He looks like the last man on earth. There are no traces of other human beings around him. As far as the eye can reach, there is not a sign of organized life around or near him. Everything seems to have barely survived a major catastrophe. But the man is completely unfazed. Even though he is completely alone, he keeps himself relentlessly busy. He does not look like desperate or even slightly worried. He keeps stoically about his business. Day after day. His only companions are his dogs who faithfully follow him around when he walks or does his daily chores. Sometimes he checks something on notebooks consumed by time. There are hints of a story buried deep in his distant gaze. But he will never give up his story or the reasons behind him living like a hermit on a plain. An existential philosophical thriller. Or maybe a documentary take on the post-atomic genre. Our nameless man is like an existential Mad Max. A film that displays an uncanny cinematic prowess of the finest kind. A major achievement. 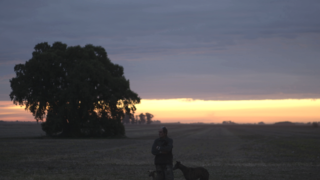