Calabria, the title of the new film by Pierre-François Sauter, designates a geographical space (a region in the south of Italy) that is as real as it is imaginary: a ‘heimat’ in which a child’s dreams are buried and which subsist, until the end, as indelible traces in the memory of an Italian immigrant worker, who died in Switzerland. His inaugu- ral archives recount an ordinary story: that of intra-European economic exile. José, of Portuguese origin, and Jovan, a Serbian Roma, who both work for an undertaker in Lausanne, have been instructed to transport the remains of this man, whose life we have just imag- ined, to Calabria, where his existence began. For the two colleagues, this is the beginning of a witty road-movie with tones of Faulkner (As I Lay Dying), which makes use of a split-screen tech- nique to transform the hearse into the stage of a theatre. And in this travelling setting, the two immigrants gradually discover each other, share jokes, and become aware of their differences and, above all, of what brings them intimately close to the dead body with which they are travelling: the shared condition of having one day been uprooted.
Emmanuel Chicon 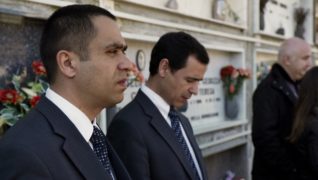 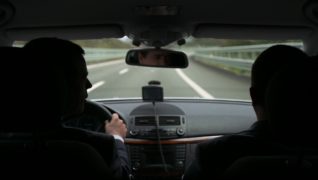