Aged 89, Mikhail Gorbachev now lives in his residence in the vicinity of Moscow, like Gloria Swanson, the forgotten star of silent film shut away in her memories of fame in Sunset Boulevard. Vitaly Mansky interviews the former leader, with an approach that is as intimate as political, drawing a fascinating portrait of one of the 20th century’s key figures.

Aged 89, Mikhail Gorbachev now lives in his residence outside Moscow, shut away in his memories of fame like Gloria Swanson, the forgotten star of silent film in Sunset Boulevard. In the middle of winter, in a cold home haunted by the paintings of his wife Raisa (and by TV images of President Putin in the background), the former leader of the Soviet Union looks back over the reforms he implemented, the fall of the Berlin Wall and the collapse of the Soviet Empire, in an exchange in which the silences and looks, the popular songs and the poems speak louder than the words themselves. With complicit determination, Russian director Vitaly Mansky focuses more on the intimate aspect of a clear-headed and vulnerable man holding on to his love of life despite his declining health and who is traversing with difficulty, with the help of his Zimmer frame, what remains of his past potency. A certain irony and a feeling of nostalgia slip out of this in camera set-up, this portrait of humanised power. 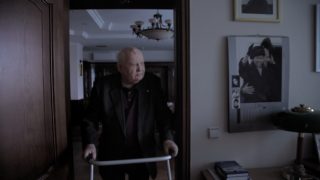 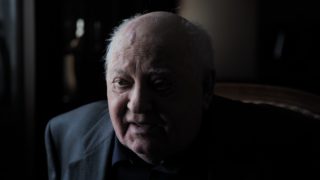