For over 20 years, Amin has been hiding a secret that threatens to ruin the life he has built for himself. He is about to marry his partner and he is compelled to come clean. Made mainly with remarkable animated pictures, Flee takes us on the journey of a refugee—from Afghanistan to Denmark. A poignant tale, winner of the Grand Jury Prize at Sundance.

For over 20 years, Amin has been hiding a secret that threatens to ruin the life he has built for himself since arriving in Copenhagen. Haunted by the traumas of his past—that he reveals implicitly—he decides to share his story for the first time, with the director, a close friend, who encourages him to come clean. The story then reveals Amin’s harrowing voyage, from his childhood in post-communist Afghanistan to his present as a respected academician in Denmark, about to marry his partner. Created mainly with remarkable images of animation so as to maintain the anonymity of its protagonists, the film takes us on the trying journey of a refugee to find asylum abroad, and invites us into his relationship with homosexuality. Told in the first person, Flee conveys a feeling of closeness and the sensation of genuinely accessing the captivating memories of the main character. It succeeds in subtly interweaving genres, while retaining a healthy touch of humour. A poignant intimate tale, winner of the Grand Jury Prize at Sundance. 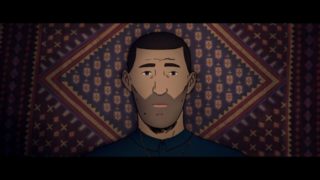