From Lviv to Odessa, from the Donbass to the Crimea, Vitaly Mansky paints a sprawling and very nuanced portrait of post-Maidan Ukraine, ripped apart by contradictory aspirations. The history of Ukraine is marked by moving borders, by the movements of peoples and by regimes that only lasted for a time. His own family, whose members he visits and listens to here, are the result of this legacy. And although a knowledge of history forces one to question the foundations of national identity, their life remains marked by the events of history that descend upon them, that intrude upon their intimacy—like these political discourses that enter living rooms via the television sets—and end up making and unmaking the most solid relationships. After his portrait of a family in North Korea in which he deflected censorship to expose the control over citizen’s day-to-day lives (Under the Sun, VdR 2016), Vitaly Mansky here draws a more personal portrait, yet one whose setting remains defined by politics. Because this man of Soviet Ukrainian origin, who is now a Russian citizen, perceives recent history like a “personal tragedy”. 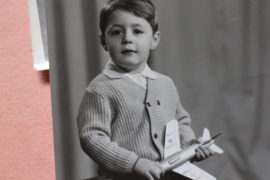