Located on the île de la Cité, in the middle of the Seine, the Paris Law Court looks like an impenetrable fortress. Like Kafka’s castle, it guards its secrets well. It is the place of power. The filmmaker, who worked there for several years as a crime reporter, is extremely familiar with its labyrinthine spaces, its practices, its ceremonies. She comes back to it now, while the Courthouse, such as she knows it, is about to disappear: its relocation is planned in 2017. So, she explores it, camera in hand, on the traces of her experience. She says: “I’m staging my intimate experience, my emotions, my feelings, and I’m confronting them with the future of an all-powerful institution. As the Courthouse gradually empties and becomes silent, ghosts take over the premises. The walls, the panelling, the drapes, and the marble steps, which are worn through use, retain their footprints forever.” Her voyage into the depths of the temple of law and suffering thus becomes a film of tremendous imaginary power. 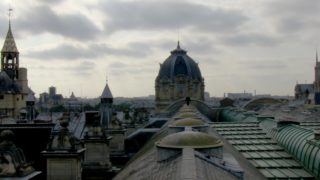