“No man is an island entire of itself, [he] is (…) a part of the main,” wrote the English poet John Donne, inspiring the new film by Dominique Marchais, who extends and deepens the reflections he began with Time for Graces (2009), a documentary investigation dedicated to the future of the French countryside. The filmmaker looks at how, on the two sides of the Alps (Sicily, Grisons, Austria), women and men are reinventing, at their own level, in the vacuoles of post-industrial societies, horizontal and collective modes of  government. During a sequence shot at the Palazzo Publico in Siena, a historian thus describes a 14th-century triptych in which, for the first time, “citizens are featured.” The visionary painter, in an allegorical style, wanted to enlighten his contemporaries about the necessary solidarity between classes, for the “common good”. In their own way, everyone, be they the founder of a Sicilian agricultural cooperative or a Swiss German architect, is the contemporary heir to this idea. Trailblazers who are discreetly building a desirable future. 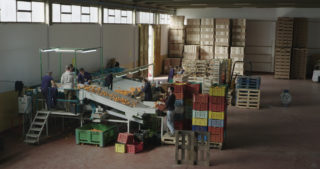