Heaven in a Garden

At the end of Eux et moi, the Papuans filmed by Stéphane Breton like “next-door neighbours” had become close to him, a family having chosen to settle just next to the house he had built in this New-Guinea valley in order to practice as an anthropologist while dreaming of a life that would boil down to “the rain, walking, a sweet potato cooked in the ashes, a life that would be the abundance of time.” Focused on his neighbours, Le Ciel dans un jardin continues the conversation, begun with the previous film, which is imbued with melancholy in the face of the impossibility of returning. This future mourning gives a particular colour to his observation, a combination of indifference (the repetition of the days governed by the principle of subsistence) and acuity (the contemplation of small things and of lost moments). The value of the shots finds itself enhanced, from the tactile close-up that captures the elementary actions—cultivating, eating, smoking—to the widest frame, espousing with a final gaze the frontiers of world that is about to be incorporated by the filmmaker as an interior landscape, a mental object. 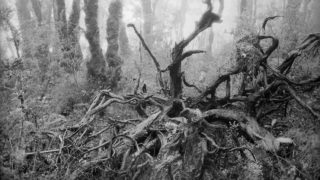