For his sixth film, Stéphane Breton changes territory once again in order to put into practice his documentary method, which is conceived of as the art of relations. Here he is now in a place that he is fond of, one of these “folds in the world” as he calls them. This time, he makes a stop in an old Spanish community located in New Mexico. La Maison vide starts like a Western: a large abandoned pipe in a desert landscape, vibrating in the wind, the creaking dating from another era. We wait for the epiphany that will not come: his protagonists are slogging away and seem to break their backs with the archaism of their daily labour (for example, collecting building stones beneath the blazing sun or going to water the animals in a tanker dating from the New Deal). The rest of the time, they seem to neck beer after beer while telling the filmmaker whatever occurs to them. In this Western without a revolver, filmed “at a drunkard’s distance”, the filmmaker tells a story haunted by death, eaten away by rust, beer, and sand storms. 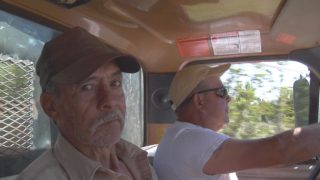