Once upon a time, in the mountains of New-Guinea, there was a dense forest, split by almost naked men following a vague Ariadne’s thread, with an anthropologist-filmmaker on their heels: “They say that this camera is my bow”, in other words, the metaphorical double of a tool enabling the Papuans to appropriate for themselves the resources of an environment whose power devours and supports human life. It is “they” who Stéphane Breton wants to film. And he, having become a “grocer” through no will of his own, observer of the bargaining that links him to his hosts via subjective camera. This therefore is the climax of classic ethnographical film, leaving no room for contemplation, and trying its hand at intimate comedy. The ob-scene, what “science” cannot reveal, becomes the  impromptu “terrain” of encounters, the ethnocentrism and romanticism of the myth of the “noble savage” are swept away by the humorous revelation of the intersubjectivity that bears a worrying and yet familiar strangeness. Filming “a square metre of misunderstandings”, is the winning gamble of Eux et moi. 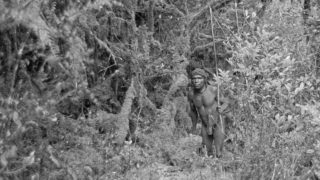