Arrived from France, Olivier lives like Robinson on an island lent to him by indigenous people, 200 km from Yellowknife, the only town in the Canadian Northwest Territories. Three visitors disturb this solitude, by re-enacting, in front of Fisnik Maxville’s camera, the “drama” of the first contact, in which a historically constituted mutual mistrust surfaces.

Arriving from France 20 years ago due to a desire to live in osmosis with nature, Olivier set himself up on a small island lent to him by First Nations people, located 200 km from Yellowknife, the only town in the Canadian Northwest Territories. Like a modern Robinson, he leads a frugal existence split between fishing and the smokehouse—a “church” in which “the fish ritual” is performed, with our hero sometimes accompanying it with a mysterious dance—in front of the complicit camera of Fisnik Maxville who records his daily gestures, his rare confessions and the beauty of the northern lights which are conducive to reveries. Three Native Americans—including a disquieting character who disfigured himself with a firearm and wears a balaclava—have come to hunt elk in the vicinity, their presence disturbing Olivier’s peace of mind. The parallel editing moves Nostromo towards a climax: the meeting between the European and the indigenous people, in which an unconscious historically constituted mistrust emerges, and the “drama” of the first contact is actualised, which this time places the white man in a position of fragility. 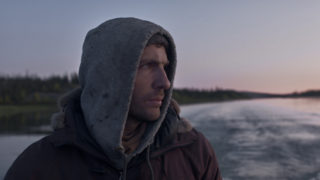 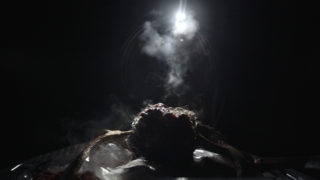