Following the closure of the coal mine in 2001, the population of Ikeshima dropped from almost 10,000 inhabitants to barely a hundred or so. On the minuscule Japanese island, time seems to stand still, nature has taken over again and is forcing its way through the abandoned buildings. A journey full of poetry which reflects the ephemeral character of all human activity.

In a little under 20 years, the population of Ikeshima, Japan, decreased from around 10,000 inhabitants to barely a hundred. The closure of the coal mine has transformed the island into a desert and deserted site, where time seems to stand still. Converted into a museum, the mine is the only one in the country that can be visited from the inside and the few tourists that do go there bring in meagre income for the restaurant and souvenir shop. From the rows of depopulated low-rise buildings to the still intact hospital corridors, Andrea Pellerani’s camera makes its way through this ghost-island, ruled over by the ruins of a not-so-distant golden age, now lost forever. Dreaming an Island captures the state of abandonment of a place in which adults project their memories while the only two children who inhabit it go to empty classrooms every day. A journey full of poetry which reflects the ephemeral nature of all human activity—the traces of which are gradually concealed by the resurgence of nature. 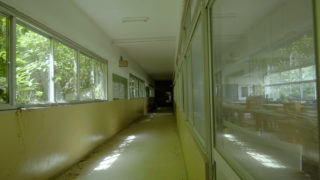 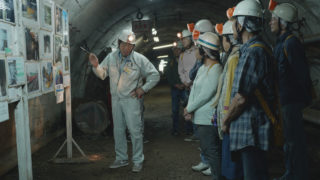