Ten years ago, activists wanting to experience a collective way of life besieged a wooded countryside near Nantes in order to block the construction of a new airport. L’Étincelle paints an empathetic portrait of the environmentalists who raise questions about the future of the “Zone à défendre”, when their struggle leads to a first victory: the cancellation of the airport project.

Illuminated by a torch, a salamander escapes from the palm of a hand, a shot that connects with the improvised barricades, and then, this incongruous presence, clashing with the scenery: a policeman armed with his riot gear, standing in the middle of a flowery field. Welcome to the “zone to defend” (ZAD), 2,000 hectares of forests and wooded countryside near Nantes that the French authorities had earmarked for the construction of a new airport. This project, fought since the 1970s by local farmers, joined by environmentalists and anarchist activists, was finally abandoned in early 2018. A first victory, a moment of joy shared in front of Valeria Mazzucchi and Antoine Harari’s camera. The filmmakers succeeded in gaining the trust of the ZAD’s inhabitants to film a pivotal year in their movement: even though the planes will never take off, the government triggers a policy of expulsions from the ZAD pushed through at breakneck speed. With precision and empathy, L’Étincelle maps one of the largest autonomous areas in Europe, where the desire for, and experience of, an alternative way of life have merged. 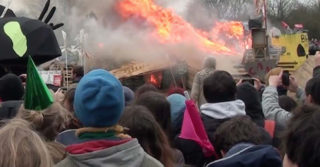 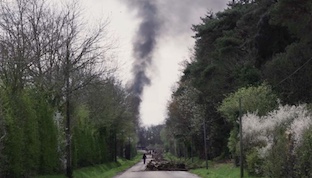 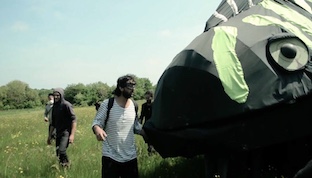