At the end of a path, somewhere in Russian Siberia, stands an immense forest, modest protector of “those who have earned their last refuge with it.” In the bordering hamlets, we meet hunters, drunks and/or murderers. Boris is one of them. He has just spent ten years in prison after having killed his wife. His daughters were sent to an orphanage after his conviction. Having regained his freedom, now living in his parents’ house, he has the impression of “waiting for nothing.” “It was my new sentence, and I had the impression that it would never end” notes Denis Lavant, who lends his hoarse voiceover to the narrator of this story, that goes to confession with no hope of redemption. Les Forêts sombres has the dry lyricism of Zamyatin’s short stories. Stéphane Breton’s camera pays attention to these pariahs who survive from collecting pine nuts, from the mine and from drinking binges where they endeavour to forget that they are first and foremost men, haunted by shame, yet without renouncing their dignity. The dignity that resists this brief curse we call life. 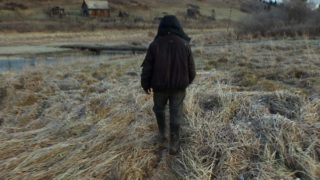 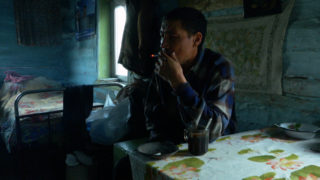