A film about the daily life of Martins, a handicapped child who will always be dependent on his parents. Ever since he was very small, Martins has had to get around in a wheelchair and has needed the constant help of an adult. Martins’s parents, Inga and Andris Skesteri, tell about their life, about their son’s character and about their hopes for the future.

Martins is a handicapped child who will always depend on his parents. They tell us about their life and about Martins, sharing their fears and hopes for his future. We listen while watching still images from the family photo album and sequences of an ordinary day with him. “Very long ago, long before I decided to become a film director, I knew I will never make films about people like Martins. Meaning that I will never make films about children or grown-ups with special needs. Because it would be unfair from my side, it would be speculative behavior. But then I got to know Martins and his parents and I understood how much they are helping me to cope with life (none of my problems is a problem; if Martins’ Mum and Dad can cope with their everyday concerns then what is it that I have to deal with compared to that? In fact, it is nothing). And so if I made a film about them, they could help others to cope with life as well. Besides, I have always thought that the idea for a film initially is an idea about the form. However, this was not the case. I conscientiously refused any self-expression through the form of the film. I am not present in this film. Only my feelings are there.” Laila Pakalnina 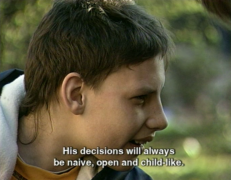