The Sorrow and the Pity

At odds with a certain 'cinéma verité' claiming to capture things with an invisible camera, Marcel Ophüls sets the stage to meet witnesses of the Occupation in France. His four-hour film caused a scandal at the time by breaking up the official myths. Before becoming a classic of contemporary history documentary filmmaking.

At the end of the 1960s, Marcel Ophüls shot Le Chagrin et la Pitié, a chronicle of daily life in the French city of Clermont-Ferrand, chosen for its geographic situation—close to Vichy and a hub for the Resistance—that challenged the Gaullist vision of a nation united against the occupiers during the Second World War. At odds with a certain puritanism typical of the disciples of “cinéma vérité”, who claim to capture things as if the camera were invisible and refuse to employ a demonstrative style, the director puts himself in the picture and innovates by giving the leading role to the often anonymous witnesses—collaborators, public figures, resistance fighters, militia members—who rubbed shoulders with personalities such as Pierre Mendès-France or Anthony Eden, without establishing a hierarchy. The contrapuntal editing, alternating between filmed interviews and excerpts from the German, French and British newsreels of the time, weaves a fascinating drama. A bona fide earthquake at the time of its release in 1971, this monumental film remains a timeless fresco on the memory of the Occupation. 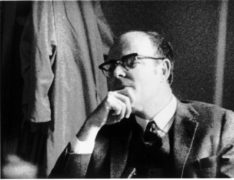