The implantation of African traders in Guangzhou is a recent phenomenon, on which Marie Voignier reports through her interlinking portraits of Jackie, Julie, Shanny who have come to set up their business on site. Amidst the monstrous accumulation of merchandise on the endless markets of the megacity, the film follows these African businesswomen grappling with the globalised Chinese economy.

After directing two films in Cameroon (L’Hypothèse du Mokélé Mbembé and Tinselwood), the visual artist Marie Voignier focused on African businesswomen come to set up business in China. From Douala and Lagos, Jackie, Julie and Shanny are among the thousands of Africans installed in Guangzhou, more or less legally, tolerated and sometimes harassed by the authorities. They spend their time negotiating the fabrication of “original” clothes with local traders or searching the piles of merchandise that accumulate in the labyrinthine markets of the Chinese megacity, “original copies” also intended to be sent in entire container loads to the ports of the African continent. Constructed in the manner of a huis-clos without an outside, NA China records a series of exchanges between “equals” that temper the cliché of a dominated and neo-colonised Africa—a reality that the film does not ignore—through the portrait of these “powerful women” (Marie Ndiaye) operating in the heart of economic globalisation. 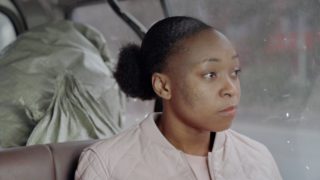 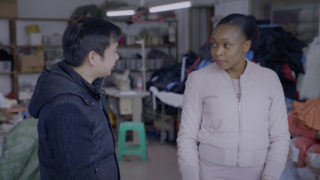 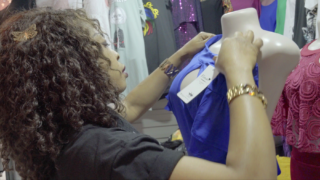