Erected in a thousand days following the architectural vision of Oscar Niemeyer, Brasilia is a sixties-era “cosmo-futurist” utopia become reality. Through multiple encounters, landscapes, and texts (by Clarice Lispector, among others), Yoni Goldstein and Meredith Zielke stage an ambitious documentary on the genesis and potential futures of modernism and spiritual transcendence.

Once upon a time, there was an oblong asteroid, named Brasilia, gravitating between Mars and Jupiter, discovered by a French astronomer at the end of the 19th century. Once upon a time, there was red laterite earth from which an ideal city bearing the same name was extracted in a thousand days, under the supervision of Oscar Niemeyer between 1956 and 1960, and whose refined architecture favoured triangles with opposing peaks, to capture the telluric and cosmic energies. The Brazilian capi-tal is a “cosmo-futurist” utopia become reality, which has attracted a spate of cults (masonic, spiritualist, etc.), inspired writers such as Clarice Lispector—for whom it represented “the heart of [her] dreams”—, in which the Esperanto invented by Ludwik Zamenhof is spoken, as if this abstract city, rising out of nowhere, considered itself as the new Babel of humanity. Woven together from texts, archives and encounters, A Machine to Live In is an ambitious film-essay in which Yoni Goldstein and Meredith Zielke invent a fascinating documentary cosmology on the genesis and potential futures of this city that is absolutely unique in the world. 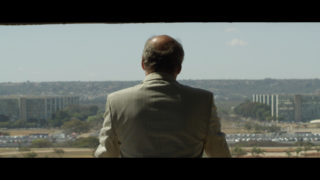