In the middle of summer, the box tree moth, accidentally introduced into France, takes over the Provencal Drôme region and leads inhabitants to improvise defensive systems to fight their invasion and devastation. In this apocalyptic climate, 18-year-old Lou discovers her feelings for her childhood friend, Sam.

In the middle of summer 2016, the box tree moth takes over Provence. Accidentally introduced into France, this moth forces inhabitants, virtually forsaken by the authorities and helpless faced with the scale of the phenomenon, to improvise defensive systems to fight the invasion of their houses and businesses as well as the devastation of their lands. In this apocalyptic climate, 18-year-old Lou spends her last summer in the South and discovers her feelings for her childhood friend, Sam. As their relationship gradually develops into a love affair, the urgency and upheaval that she feels echo her environment; an ecosystem subverted by an unexpected invasion. Guided by the voice of Lou, Roxanne Gaucherand’s film interweaves sequences of journalistic investigation, documentary reporting, amateur video and coming of age account with brio. Edited like a thriller, Pyrale is a resolutely accomplished and intriguing cinematographic object whose universe constantly shifts between the real and the fantastic. 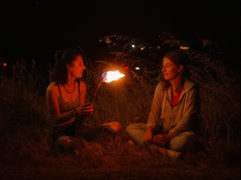 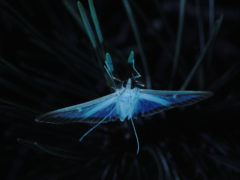