He captures the images, she the words. In 2015, they travel together, from Kosovo to Afghanistan, via Washington D.C.’s black community. Polly Jean Harvey writes what comes to mind during this drift along the margins of the Empire. Seamus Murphy films her. Fanciful and slender, bundled up in her dark parka, playing an out-of-tune piano in Kabul or following a circumcision ceremony near Pristina. Her unique, husky voice is mixed into the ambiances, like a “witness” voice. Which will become a song, during the recording—with her longstanding accomplices, John Parish, Mick Harvey, etc.—of what is being created before our eyes: The Hope Six Demolition Project, PJ Harvey’s eleventh album. The film moves between the outside and inside of an ephemeral studio fitted with one-way glass, set up in Somerset House in London, so that the public can witness these sessions designed as an installation. A Dog Called Money is an intimate and rare voyage into the inspiration, writing and art of one of the greatest singer-guitarists in the past 25 years of rock history. 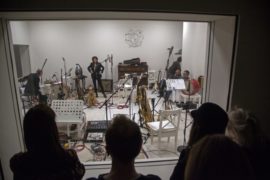 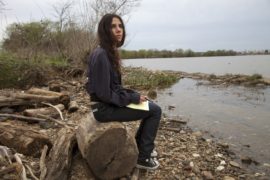