Some adventures seem to have been invented so that they can be brought to the screen. The crazy bet of going around the world on board a plane powered only by solar energy is one of them. 43,000 kilometres across five continents and two oceans, supported by a team of over 100 people: engineers, meteorologists, air controllers, logisticians, and communicators, responsible for guaranteeing the safety of the plane and ensuring the smooth running of the mission. The saga of the Solar Impulse 2, which is the name of the plane, is borne by Betrand Piccard and André Borschberg, two pioneers with very much the same spirit of the Wright Brothers and Charles Lindbergh. Here we follow their round-the-world journey at each of its stages, kept on tenterhooks as one unforeseen event follows another. And going beyond the record and the technological prowess, the mission also pushes at the boundaries to invent tomorrow’s world. For soon, perhaps, flights without greenhouse gas emissions will become the norm. 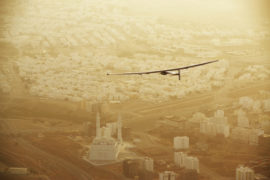 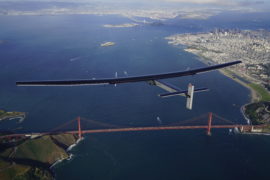