Since its first correction in 1863, stretched over a generation in search of progress, the Rhône has been constrained, held captive by the dams man built. Looking for a territory that seems lost, Mélanie Pitteloud draws the human, biological and poetic cartography of the river’s valley (in the canton of Valais), as new corrective works begin. Notably using archive images, she surveys a history and welcomes, furthermore, the accounts of actors of this change, or those of inhabitants maintaining complex relationships with the Rhône. “You have to go so far, now, to find a wild corner: the whole plain is irrigated, precisely planted, the Rhône that grandma used to hear at night, in the day, and that came to lap at the bottom of her home (...), the Rhône is so small, strangled between the dams, that we can no longer hear it.” (Les Sœurs Caramarcaz, an unfinished drama by Corinna Bille). Like other authors having taken an interest in the river, a filmmaker explores, from the inside, a place and its supposed improvements, with finesse and undoubtedly a little affection for the water course that has thus been subdued. 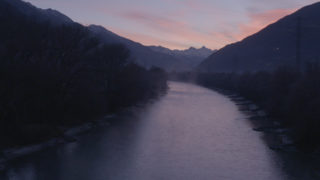 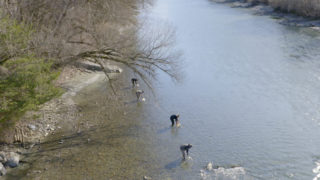