Kirsten Johnson watches as her father Dick's body and memory fail in his 80s. Preparing for the end, she films a comedy in which she imagines the various possible deaths of her father, staging him in often absurd or improbable scenarios. A joyful film about family love, full of humour as a foil against the inevitable.

Kirsten Johnson watches as her father Dick's body and memory fail. At the age of 80, this joyful retired psychiatrist is suffering from episodes of dementia. To cope with the future demise of this man she loves so much, she decides to create a comedy in which she stages the various possible deaths of her father. With an army of stuntmen, she imagines absurd, crazy, almost cartoonish scenarios, in which her father always comes back to life. What shines through Kirsten’s relationship with her father is this unconditional love, where even the most painful memories – such as the demise in 2007 of her mother, who suffered from Alzheimer’s – can become moments of joy in remembrance. Kirsten Johnson switches on all her creativity and cleverness to create this work, which takes shape gradually, like the traces of an extraordinary family still inventing itself, and which makes light of death with humour, for the benefit of the moments of happiness that are still possible, together. 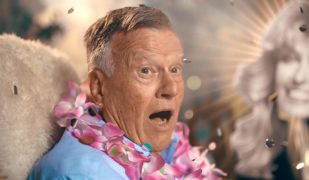