Revolutionising bitsuki, traditional Cameroonian music, the band Les Têtes Brûlées begins a tour through France in 1988. At the arrival on the tarmac, Claire Denis is waiting with some filmstrips and her camera. This is the starting point for a boisterous trip alongside these highly charged musicians.

Watch film from the other countries in the European Union and United Kingdom
www.tenk.eu.com/fr/d/festivals/visions-du-reel-2020/man-no-run

Electrifying bitsuki, traditional Cameroonian music, as much as possible, the band Les Têtes Brulées begin a tour outside their country for the first time in 1988. They head to France where, on their arrival on the tarmac, Claire Denis is waiting with some filmstrips and a Nagra recorder. The filmmaker’s tinkering combines with the group’s punk spirit to create an independent film that roams around the peregrinations of the musicians. This spontaneity and mise en scène is discernible in the game that sets in between the watcher and the watched. From parties to gatherings, from concerts to the backstage area, from discoveries of an unknown territory to homesickness, it is all there. Whilst letting herself be guided by Les Têtes Brulées, Claire Denis also takes care to reveal the heart of their music. The many scenes of concerts that run through the film show the effect of shock that the eruption of their sounds generated with the public. Becoming a legendary group about which conflicting arguments have been made, Man No Run makes these men simple immortals. 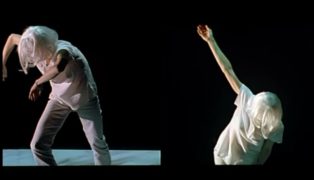 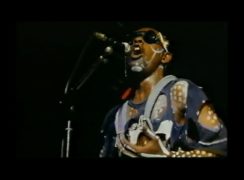