In the Beauce region, perched eight metres above the ground for a week, two men are using sheer arm strength to move a strange vehicle along a concrete viaduct, the remains of the test course from the Aérotrain monorail. The handcar, affectionately nicknamed Albertine, moves at 2 or 3 km/h, when it is not broken down. Why are they pumping? We have no idea at all. Neither do they. The movement is repeated, monotonous, like this tree-less agricultural landscape broken by the horizontal line formed by this concrete structure, which has never served any purpose apart from feeding modernist dreams that now belong to the past. The challenge of this Dadaist road movie speaks for itself, even if it does not have the spectacular nature of an ascent of Everest. In the same manner, it resumes the whole absurdity of the human condition. But the two accomplices seem to have remembered the lesson of Albert Camus imagining Sisyphus happy: they sing, share their meals and the tenderness of a friendship. They are thus open to lucky encounters with the inhabitants of the world below, from which they have isolated themselves. 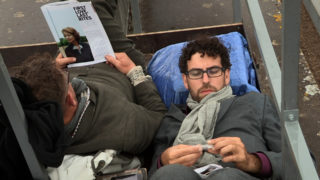 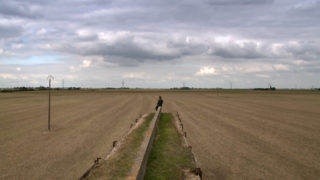