Turin. Stallholders set up on the market square every morning. Peppino is one of them. A body in the crowd. A man who is in trouble, like to many others as well. Moved by desperation, he is the momentum, the rhythm of the film. The camera records his movement on his permanent errand, while he walks around the city or the Piazza della Repubblica, whether it’s raining or night has already fallen, in search of some goods to put together a fireworks stand. This raw, helter-skelter mise en scène reveals a social, coarse, and hard reality in which Peppino’s struggle seems to be personified by the tension of this incessant movement. And this place, where stallholders spend their time setting up their stands, haphazardly, then taking them down to store them in a nearby garage during the few hours of night-time, becomes a symbol of this life on the edge. Where people, every day, must rebuild their routine, start from scratch again, in order to have a few euros in their pocket at the end of the day to get them through to the next one, and then start over. 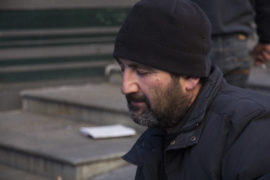 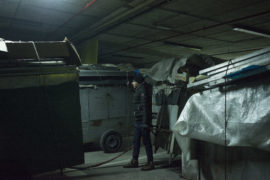