The film takes place in a motel somewhere along the U.S. / Mexico border. A man sits in an armchair. A black mesh covers his head. In his hands lies an empty copybook in which he draws and writes relentlessly while talking tirelessly about what used to be his job. A former contract killer for the Mexicans drug cartels, the man now lives under witness protection. His former bosses, though, still want him dead. Therefore, they put a 250 000 dollar price tag on his head. For almost 80 minutes he rants about the hundreds of persons he has killed, tortured and kidnapped while serving also as the commander of the state police in Chihuahua. El Sicario, Room 164 is Gianfranco Rosi’s most controversial work to date. The film stems from Charles Bowden’s article The Sicario published in 2009 by Harper’s Magazine. Deliberately challenging the acquired notions of truth, the film is as thrilling as it is profoundly shocking. The camera locks into physical confrontation with the killer. Face to face with the Sicario, Rosi does not shoot to kill but to bring his protagonist to life. 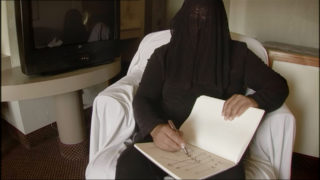