Five years after Bassidji, Mehran Tamadon continues his attempts to establish a dialogue with those who defend the Islamic Republic of Iran. This time, and not without difficulty, he convinces four mullahs to live with him for two days. In a confined space and through a device akin to a reality-show experiment, the clerics and the atheist filmmaker try to solve the problem of “living together”.

Five years after Bassidji (VDR, 2009), Mehran Tamadon embarks on a new dialogue with defenders of the Islamic Republic of Iran. Not without difficulty, the filmmaker convinces four clerics to come and live and debate with him in his mother’s house, far from the sweltering heat of Teheran. The device behind Iranien is simple: everyone has a private bedroom, but the lounge, where the discussions will take place, is conceived like the spatial metaphor of an ephemeral microsociety – the experiment will last two days – where the atheist and the clerics will experience the problems of “living together” ... while the camera captures the verbal episodes of this “peaceful adventure” in which individuals holding opposing world views seek to articulate their differences. From discursive strategies to devious sparring, the mullahs enter into the spirit of this intelligent “Big Brother” with interest, to the extent that they sometimes appear sympathetic to it. But when getting close to the “red lines” – the issue of women, above all – their ideological rigidity is revealed, and the utopia, a moment glimpsed in the medium term that put the contradictors at an equal distance, abruptly vanishes. 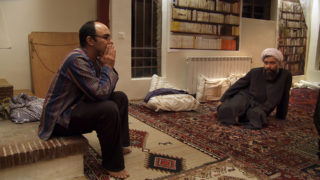